Posted on 23rd January 2015 by frankenfurter

Today I bring you not news of my own bouncer but photos and details of another bouncer, many thanks to Baby Robin. It’s always interesting you see details of other similar projects, theres often a lot to learn. It pays to avoid making the same mistakes, then you’re free to make different ones. Now on to the detail. 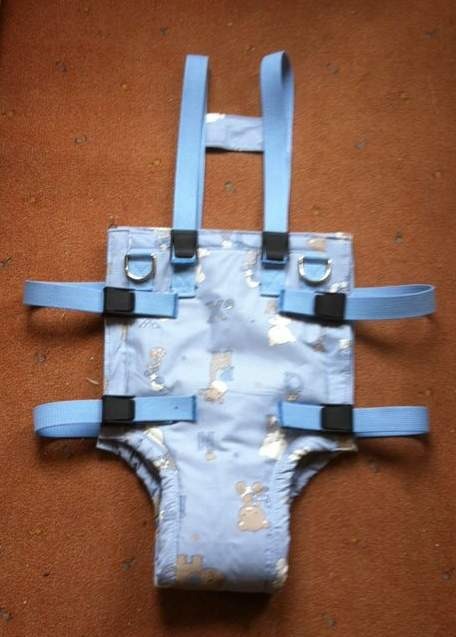 The harness was custom made by No Escape. The main straps run from the top back through the crotch-area to the front. Since they must bear all the weight (including the bouncing), it uses wide canvas belts like used in straight jackets.

The belts on the side and over the shoulders do not bear any weight, so for easy access and adjustability can be opened. 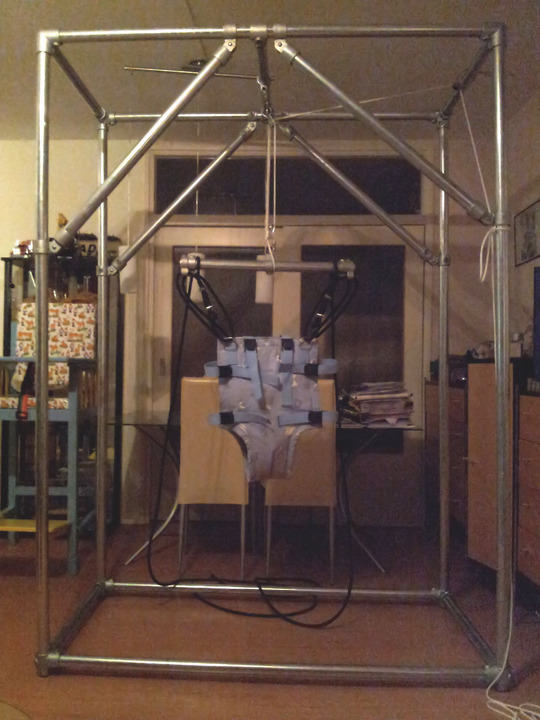 Since the shoulder straps are adjustable and thus can not bear the weight (and to maximise height for the bouncing effect) the bungee cord (4 x 10mm on each side) are fitted to the D-rings directly onto the harness. The bungee cord is the same used for trampolines and can be ordered by meter online. 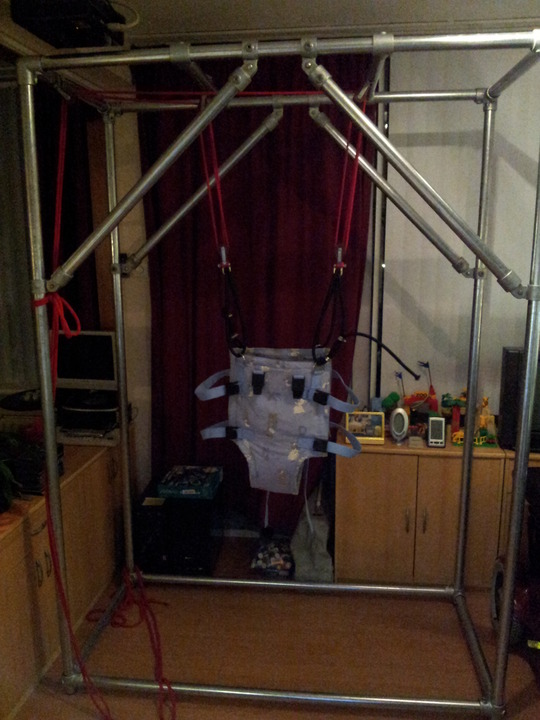 Initially the design had a spreader bar, but this caused a problem with the total height, so this was then changed to double suspension with the bungee cord going directly from the harness to the frame. As this means the bouncing happens in the opening between the top bars this gives much more height for bouncing in. 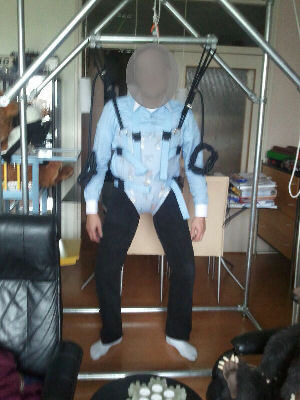 The stand is constructed from 3,25mm thick round, galvanised steal tubes (42.4mm diameter) with tubing clamps. Total height is 230cm, 70 cm deep and 150cm wide. It is calculated to hold 500KG, since bouncing can have greater force than just the weight – up to triple according to Robin.

Robin also reports that since all the weight is held via the two crotch-straps in the harness, it can become somewhat uncomfortable for men when bouncing for an extended period (longer than 10 minutes). Just hanging is apparently no problem. Robin has no solution yet, he also notes climbing harness have the same issues – something I can confirm! I’ll be thinking about padding and spreading the load in this area to minimise this in my design. Another option is to relieve some of this pressure by forcing other areas to provide some support – under the arms is the next obvious place, although I’m sure this could also be uncomfortable after some time.

Robin’s solution to height is very practical, I’d decided to ignore this completely as I was going for closeness to the original baby design as possible. This was possible due to having a venue in mind with high enough support points – although this limits the possibilities for testing.

This entry was posted in Door bouncer. Bookmark the permalink.

One Response to Another bouncer

This site uses Akismet to reduce spam. Learn how your comment data is processed.